With the Beatles being as popular as they are, references, tributes, and parodies of them have been made in many different types of media, television and film being no exception.  Welcome to Beatlemiscellania, another regular project I'm adding to the blog.

Song names will be capitalized where they are mentioned, and song lyrics provided in quotes.

Through the use of clever cuts where one villain is talking and the next completes their sentence, we see Mojo Jojo, Him, Princess Morbucks, and Fuzzy Lumpkins are all planning to destroy the Powerpuff Girls on the same night. All four of them show up at the Powerpuff Girls' house and argue over who will win until finally the girls come outside and ask them to be quiet so they can sleep. Mojo, Him, and the Princess all fire on the girls at once with energy beams, which leaves the girls defenseless and in pain until they fall to a height low enough for Fuzzy to throw his large rock at them and crush them. The four villains decide to band together, and while Him first suggests they should be The Silver Beatles (an early name the Beatles used), Mojo rejects this name and says they should be The Beat-Alls. The scene fades and we see the four villains in profile, much like the With the Beatles cover. It's accompanied by a guitar chord very similar to the beginning of "A Hard Day's Night." 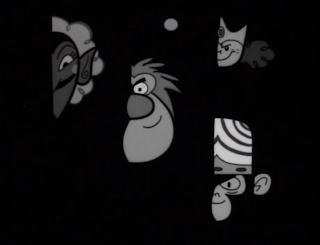 A narrator with an English accent takes over at this point, and we see girls running and screaming (in terror) while the Beat-Alls go on a rampage. They cross a street that looks like the Abbey Road cover while the narrator tells us it was a Long and Winding Road for them to get here. They are also now known as the Bad Four (instead of the Fab Four). Mojo tells a bank teller “Now give me your money, that's what I want” and the narrator explains that the Beat-Alls have been providing hit after hit. He's talking about physical hits in this case. 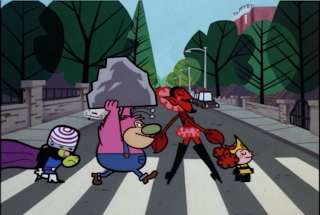 The Powerpuff Girls arrive at the bank and a fight ensues, where all the dialogue refers to songs.

Him: “I Should Have Known Better”

Mojo: “Better Run for Your Life as fast as you can, little girls”

Him cries “Googoogajoob” as he fires an attack.

Fuzzy (called the shy one by the narrator, therefore making him the George Harrison of the group): “I'm gonna let you down and leave you flat” 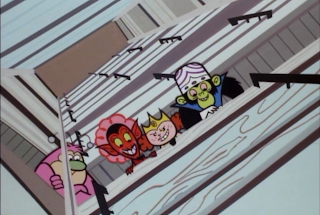 The narrator assures us that The Brutish Invasion has begun. The Beat-Alls look down at the defeated Powerpuff Girls in a image reminiscent of the Please Please Me cover. Eventually, the Powerpuff Girls give up fighting them and the Beat-Alls are therefore given a Ticket to Ride. In case all this sly stuff was just too subtle for you, the Beat-Alls beat up the cartoon versions of the Beatles themselves while Mojo asks “the people in the cheaper seats to leave and the rest of you to hand over your jewelry!” (this is not a lyrical quote but rather based on a statement John Lennon made on stage in 1963.) 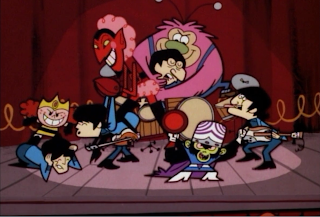 Sgt Pepper (who looks much like the one in Yellow Submarine) makes a statement. “Help, we need somebody. Not just anybody. We need the Powerpuff Girls.” The narrator, now shown to be a reporter, questions if the girls will return. “Perhaps, perhaps not. Tomorrow Never Knows.” The TV show he is a part of is called A Day in the Life. The professor interrupts the girls watching the special and tells them “I read the news today. Oh boy” and hands them the paper. “Beat-Alls Crash Mr. Kite's Benefit” is the headline. The Powerpuffs are discouraged, and the professor talks to them. “Yesterday our troubles seemed so far away. Now it seems they're here to stay. Sitting here Eight Days a Week, everyone seems to think you're lazy, I don't mind, I think they're crazy. But you used to be running everywhere at such a speed, now you think there's no need.” 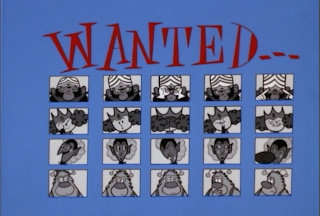 The girls think there's no point, they'll never save the day again. “Oh, You Can't Do That. What will the citizens of Townsville do when they look for the girls with the sun in their eyes and they're gone? ... Mojo Jojo was a man who thought he was a loner, but he knew it couldn't last. He's just getting by With a Little Help from his Friends.” When the girls ask if they should break up the Beat-Alls, he tells them “Yes, I'm certain that it happens all the time.”

“How?” they ask. “Listen, do you want to know a secret?” As he tells them, our regular narrator says he thinks the professor has some Magical Mystery tricks up his sleeve. 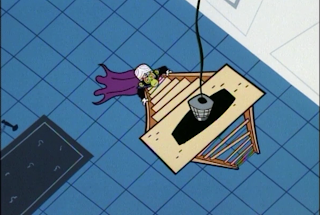 The Beat-Alls break into another bank and Mojo announces that he wants to hold their cash, but someone else is already robbing the bank. He's pointed toward a ladder and a hanging magnifying glass, much like the art exhibit John Lennon first saw of Yoko Ono's. On the ceiling in small print is written “This is a stick up” (Yoko's just said “yes”) and Mojo thinks it's brilliant. The responsible party turns and it's a chimp dressed just like Yoko Ono (specifically her wedding outfit to John) and it's clear the two of them are in love. Mojo exclaims “I've Got to Get You into My Life” and she replies in screeches. Her name is Moko Jono and she's a performance criminal. 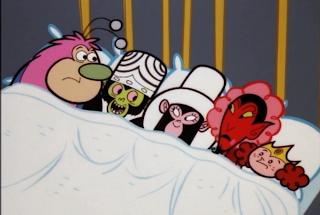 The five of them have a bed-in titled Annoyance Crime No 9 and Mojo tells them to “Imagine all the people and how annoyed they will be that they can't reach their destinations on time” because the bed is in the middle of a busy street. They then steal only white items from a grocery store (It's all right because it's all white). The other Beat-Alls are not impressed. Mojo joins Moko in screeching loudly in the street in a mock form of primal scream therapy, but here the point is only to cause the various people on the street (including the Beatles from Yellow Submarine) pain. This finally causes the other Beat-Alls to quit.

When Fuzzy asks what they should do now, Him replies “Let's Get Back to where we once belonged.” The three of them are attacking the rooftops (because this whole sequence is meant to be like the end of the Let It Be film) and the mayor calls the Powerpuff Girls for help, saying the criminals “just won't Let It Be.” Once the girls hear that it's just three of them, they go to stop them.

The girls are once again flattened under a rock.

Him: “I'd just like to say thank you on behalf of the group, and I hope we passed the audition.”

But the girls pop right back up.

The villains are defeated and locked up, and Blossom declares “they're going Nowhere, Man.”

Mojo and Moko are walking along when Mojo points out signs “Here, There, and Everywhere” saying the Beat-Alls are over. “I've Got a Feeling, a feeling deep inside,” he says, “A feeling I can't hide. Oh no.”

“Oh yeah!” the girls respond, telling him that he and the Beat-Alls are done. He says he doesn't need them as long as he has Moko, and their evil will spread Across the Universe. The girls sigh and call “Hey Jude!” and Judy from the Townsville Zoo appears. She calls for Michelle (pronounced as it is in the song) and Moko sheds her clothing and joins the girls. Judy rubs salt in Mojo's wounds by telling him Michelle doesn't like him at all. She agreed to help break up the Beat-Alls because Mojo gives monkeys a bad name. Michelle isn't a criminal but she is a performer. Though Judy cautions that “One day monkey won't play piano song.” (This is the commonly misunderstood version of the French in "Michelle.") The girls take Mojo to jail and he is sad that they took his love away. Blossom says it's like the song “The love you take is equal to...um... oh who cares it's by some dumb old band anyway.”

Narrator: “I don't really want to stop the show but I thought you really might like to know that once again the day is saved thank to the Powerpuff Girls!” A note reminiscent of the one ending “A Day in the Life” fades out in the background. Those two ringing chords aren't the only musical tribute either; the entire episode is scored with songs very close in sound to the Beatles music.

I'm counting at least 57 references in all, more if you count all the various musical cues that sounds like their songs. The episode is a Where's Waldo for Beatles fans, with only maybe the “Free as a Bird” music video beating it in terms of number of references involved. I think Blossom's comment at the end is probably meant to acknowledge that most of the children watching this episode wouldn't understand most of the references, but it's still a cute enough story that I don't think the knowledge is required. But for those of us who do have it, it's an absolute treat.

Whenever I watch this episode, I do so with a big smile plastered on my face. I can only imagine how much fun they must have had in the writer's room, finding ways to inject the titles and lyrics and images all over the episode. It's a loving tribute to the band and a fun way to introduce this knowledge to kids. The portrayal of Yoko is harsh, but I think they did a nice tribute to her in their own way by including the references to her various performance art pieces. She speaks in screeches because in this world, Mojo is the only monkey who can talk. While it is a reference to her atonal singing voice, I don't think it's meant to be a flat out insult. Not to mention that in this scenario, being responsible for breaking up the Beat-Alls is a good thing.
Posted by therealphoenixanew at 11:00 AM